Equal parts fuzz pop and meteorology (allegedly), this debut track from brand new project Sonnyskyes is a promising little ditty. Keep an eye out for their upcoming record The Imaginary Friendship.

Pebaluna have released two tracks so far off their upcoming album Carny Life, which will be out on MDB Records on April 15th. I'm reminded a little of the folksy historical fascinations of The Decemberists with some great lead vox to boot.

Even when your lyrics are as optimistic as they are on this cut from Dazylite's The Weekend EP, it's hard to make them sound cheerful when they're encased in hazy, drifting dream-pop. Still, the contrast between form and content only enhances the ride through this slow build.

There is a rather interesting musical event coming to Long Beach. Unlike most musical events, this event will be displayed as art. I’ve included a sample that I found on YouTube, so you that you can experience this in the comfort of your home and then decide if you want to head out to take in the whole experience.

The music exhibit opens on Friday at Cal State Long Beach's University Art Museum. This event was originally performed in the mid 1970’s by Lou Reed. It was called, Lou Reed's Metal Machine Trio and at the time his fans pretty much didn’t like it.

I believe that I understand the problem. Lou Reed as a musician made some excellent musical sounds that probably seemed like the perfect musical experimentation that would put him over the top. Honestly listening to it you can pick up on that sense. You literally have a moment of wow.

The real problem is that it doesn’t last. What starts out sounding amazing very quickly turns into something terrible, something that you honestly don’t want to hear. This is actually strange, as I said it was amazing until suddenly it wasn’t, literally within seconds it went from one extreme to the next.

Hopefully having his metal Machine Trio set up as an exhibit rather than a music event will bring in a better response. One thing that I personally think would add  to it is maybe some lighting, like an old light show. As it is, it’ll only be audible with absolutely zero visual effects.

sowing love from one ex-con to another Earlier last week skate legend Andy Roy came forward as the crazed fan that had previously “attacked” DMX on stage. He stepped up to clear his name, he wasn’t actually trying to attack DMX he just wanted to “show his love from one ex-con to another.” DMX was released earlier last year following charges of violating his probation by consuming alcohol during a concert that he had performed by special permission that led to additional drug charges.

Andy Roy, like DMX was also sent to prison based on drug charges. One extreme difference is that they definitely had separate judges or maybe DMX just had more money. Whereas DMX originally just had probation, Andy went straight to Pelican Bay of all places for a two year sentence.

Regardless they’re both out, free to show their love if they want to. One thing about this whole incident is that this free publicity just may have been Andy’s saving grace. Andy had been long forgotten after being sent away, even after his release his name certainly hasn’t been thrown around like it once was.

It’ll be interesting to see if Andy is able to step back up to his past fame. I remember him and he was one of the true skater’s some of his moves were amazing just to watch.  His downfall was a heroin addiction following a bunch of skateboard politics and an eventual injury. He like many people who slipped down that path decided to give it a try when it was offered, and his life changed forever.

Music is all about the fans and Long Beach fans have shown that they’re all about the music, although I have to say that it might be a good idea to learn a little control no matter how much excitement is currently being experienced. Without fan support musician wouldn’t have anyone to sing or play for. DMX proved first hand that he believed in his fans.

In a recent Long Beach concert a somewhat over excited and possibly crazed fan jumped the stage and lashed out from behind DMX and reached for his throat. Bouncer reacted immediately and escorted the DMX fan off the stage. Amazingly DMX showed the world that the music in fact must go on.

There was a slight music interruption of mere seconds to what DMX proclaimed, “We don’t stop the music for sh@t!” Literally he avoided an attack and barely missed a single beat. Way to go DMX.

I haven’t actually been to a DMX show so I can’t say that this is typical or not. All I do know is that the quick reaction for the sake of the music was more than impressive. Let’s not forget the speed at which security reacted and handled the situation. I hope they’re being paid well for their quick reaction, whatever it is they deserve more. I mean after all it could have been severely worse under different scenarios. My hats off to DMX and the security team for expedient reaction and self-control, keep the music playing.

Bring in the New Year right.

The day of stomping 2011 into the past and looking into the bright 2012 future has finally arrived. Many celebrations are already underway, with more starting up as the night nears. New Years is celebrated in many ways, some people choose the quietness of their own homes followed by a quick midnight stroll of fireworks, and some want live music and dancing while others just want anything that makes them laugh. Fortunately, Long Beach has everyone covered.

There is an absolutely free Fireworks show scheduled at marina Del Rey. The show starts at 11:59 pm with a countdown to 2012. This Fireworks show is being hosted by the Department of Beaches and Harbors.

If you’re out looking for a night of excitement then you need to board the Queen Mary. The Queen Mary is hosting a New Year ’s Eve party filled with dining, dancing and live music. That’s not all, you also get to see the New Year’s Eve fireworks as the Queen Mary is in a prime viewing location.

If you love fireworks, though all you really want to do following a long tiring year is laugh it out then you won’t have to go far. Head on over to the Improv of Hollywood and enjoy a night of laughs as you watch Fear Factors Joe Rogan laugh it up. Rogan began as a standup comedian in none other than the Improv of Hollywood, so in honor of that he’s returning to his roots to share News Year’s Eve with the Long Beach fans that made him what he is. This warm and dreamy single from Pageants suggests that a new record from the Long Beach might be well on its way. Hope to see more of these guys.
Everything Motorcycles 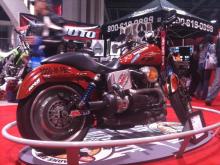 The Progressive International Motorcycle show has arrived in long Beach. It kicked off today December 9th and will run through Sunday, closing up at 5pm. If you want a full day of motorcycles, make sure you get there Saturday, doors open at 9:30am. This event is certain to please every motorcycle enthusiast.

There will be some of today’s leading motorcycle manufacturers in the show including Harley Davidson, Kawasaki and Indian Head. This show is letting Motorcycle Clubs volunteer through the club connection. You can contact them with your basic club information such as the name of your club, the number of members that you have and the name of who should be contacted from your club. A few of the clubs that are already listed as volunteers include the Dirty Crew, Chrome Angels and the Ghost Riders MC.

This show has numerous sponsors that you can have the ability to check out including Rebel Girl, providing leather goods and other motorcycle wear.  In addition to Rebel Girl this show is being sponsored by the regular sponsors Allstate, the American Motorcycle Association and the Motorcycle Safety Foundation. Feel free check out any of these sponsors for valuable information. If you are currently looking for recruits, make sure that you stop by the Pit Crew to pick out the best.

You can buy tickets at the doors or save time by purchasing them online. If you do purchase tickets online, you’ll need to have a printer hooked up so that you can print off your tickets. Regardless, tickets are available at the door some come out, have fun and ride.

Long Beach musical talent shines through as McKissock wins $50,000 from her music video entry in the Vidi Student Film Contest. She used the music of Mika Ben-yami with the song Nothing is Wrong. She had to create a 2 minute and 22 second video, her video was considered the best submission out of all the candidates.

I have watched this video, and though it’s absolutely not my taste in music, I have to admit the artistic style that she chose to run with in the video stands out and in my opinion makes her worthy of her recent win. She chose to use the song as a single day, the video starts out with her waking up and climbing out of bed and ends with her climbing back into bed to fall asleep.

Throughout the video, it shows her various encounters of the day. This video has a surreal feel to it. We hope to see many more in the future once she has completed her graduation.

According to Everything Long Beach, she was surprised to not only become a finalist but also to become a Grand Prize Winner. She discusses in her interview that she had met many challenges throughout the process and that it really showed her the difficulties that can come with producing a video, especially a shorter video.

It appears that she met each challenge with success. Simply watching her winning video will show just how successful her production was. She deservedly won this contest, congratulations are in order.

Hot music, concerts, and bands from the Long Beach area

We Support
Climate Activism
Click to reach the League of Conservation Voters.
Conversation Processing Intelligence™ beta website!
Click here to visit the hub of the Klat Network.
This site is part of the Klat network of blogs, forums, and communities.

Music Featured as an Art Exhibit

DMX attacked on Stage and Keeps the Music Going